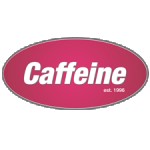 Cafeine has the best range of softdrinks and makes these awesome Salad and cheese baguettes, but they pretty much always sell out before lunch so vegetarians must be fast.
However today's baguette had a 40 cm blond hair (with 10cm brown roots) in it... so I'm now wondering whether health and safety need to give them a visit.

Efficient service but I was disappointed that patrons were NOT recycling. I suggest that there be a SIGN put up to inform patrons as to which item should be placed in which bin. Also, there should be TWO 'Recycling' bins for each One 'Rubbish' bin (recyclables, e.g. cups, quickly fill-up a bin).